From Native American history at the Seneca Rocks Discovery Center to the Boggs Museum run by the Pendleton County Historical Society, Pendleton County beckons the history lover in all of us. Our heritage is rooted deep within the ridges and valleys of Pendleton County. In 1758 a band of Shawnee Indians attacked and burned Fort Seybert. After leaving the fort, the Indians, along with the prisoners, went north across the mountain into Greenawalt Gap. From there they journeyed through Germany Valley, Seneca, and onto their destination into the Ohio Valley. These same valleys tell the story of men who gave their services, and many of them their lives to the Confederacy and Union during the Civil War. These accounts of history are kept alive through events such as the Treasure Mountain Festival (held annually the third weekend of September each year) and through stories that are passed down throughout the generations.

In 1985 a portion of the town of Franklin was designated a Historic District by the National Park Service and placed on the National Register of Historic Places. The town has a significant collection of 19th century architecture for history lovers to explore. A driving tour CD to travel Pendleton County’s country roads is available for purchase at the Pendleton County Convention & Visitor’s Bureau. These tours will take you off the beaten path to explore quaint rural unincorporated towns while stopping at markers to listen to stories that tell of years gone by. 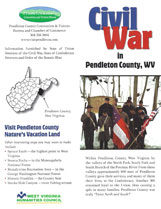 Learn more about the people and places touched by the Civil War in Pendleton County. Contains details about Stonewall Jackson’s Headquarters, the Battle of McDowell, and the occupation of Franklin by Union Soldiers.