THE CONVENTION AND VISITORS BUREAU

The Pendleton County Convention & Visitors Bureau (PCCVB) proudly promotes and supports the beauty of Pendleton County, the surrounding areas and West Virginia. The PCCVB recognizes the value of tourism to support our businesses and organizations and strives to preserve our rich heritage and traditions. PCCVB markets Pendleton County’s tourism related businesses, historic sites, lodging facilities and recreation areas through an advertising campaign.

The PCCVB developed the Heritage Travels driving tour CD and prints the county brochures (Visit Pendleton, Civil War in Pendleton, Walking Tour of Franklin, and Ride the High Five) which are available at the office at 47 Maple Avenue, Franklin, WV.

Pendleton County, West Virginia was founded in 1787 by the Virginia General Assembly from portions of Augusta, Rockingham and Hardy Counties. The land area is comprised of 698 square miles. Of that, 29% is Monongahela and George Washington National Forest. 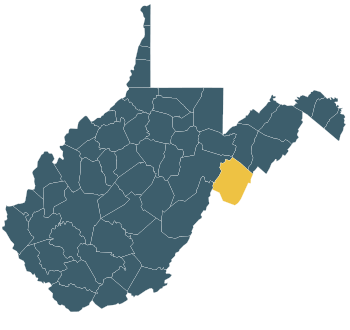 Franklin is the county seat. It was established in 1794 and is comprised of 358 acres. According to the 2010 Census, 7,695 people live in Pendleton County with 721 residing in Franklin.