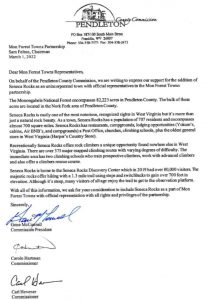 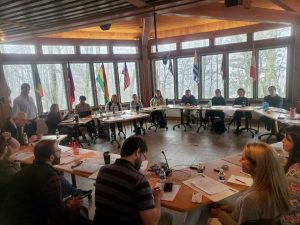 April 6, 2022 Pendleton County had the honor of hosting representatives from the Mon Forest Towns for their quarterly meeting. Future Generations University graciously hosted the meeting, allowing visitors to take in some of the best views Pendleton County has to offer.
During this meeting, it was voted upon and unanimously passed, that Seneca Rocks, West Virginia would be the first non-incorporated town to join the partnership. This is something the Pendleton County team has been working very hard to accomplish since joining the partnership.
Due to this vote, Pendleton County is now home to two Mon Forest Towns, Franklin and Seneca Rocks.
We are elated to share this news. In addition to the benefits it brings to the community, this project was something Carole Hartman was passionate about. The completion of this project was one of her last actions as Pendleton County Commissioner.
We are thrilled with today’s success and achieving this piece of her vision.
#PenCoWV
#MonForestTowns
#MonForestTownsFranklin
#MonForestTownsSenecaRocks